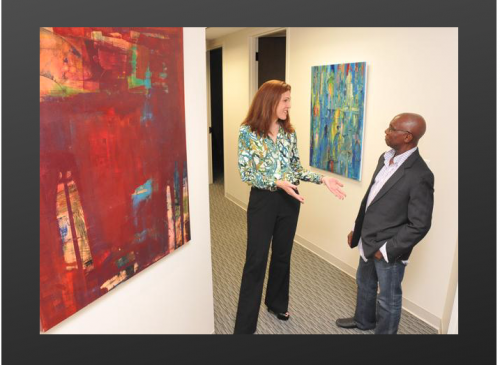 When attorney Jenny Kiesewetter was preparing to move into her new 3,500-square-foot office in East Memphis, she was looking for a modern, high-tech theme. She wanted a new space that wouldn’t have been out of place in San Francisco or New York.

The best way to do that, she thought, was to use art. However, the budget for original pieces of art can hit five or six figures if you get carried away, and Kiesewetter had to keep costs under control.

At the same time, Ephraim Urevbu, owner of Art Village Gallery, a Downtown gallery, was looking for a creative way to make the city more art conscious. When he was in the 2003 class of Leadership Memphis, Urevbu developed a concept to bring art to businesses and the general public. That concept, the Art Boardroom Collaborative, provides business owners with art they can display in their offices. Instead of buying it outright, they can lease it over time.

“Since (Memphians) weren’t coming to me, I had to develop a way to take art to them,” Urevbu says. “The best way to do that is to get into businesses.”

In addition to working with Kiesewetter, Urevbu also leases art to Highwoods Properties, which has placed art in the Crescent Center and Bank of America’s East Memphis office on Poplar. Art Village Gallery also leases pieces to the Memphis International Airport.

The art comes from a group of seven international artists from the U.S., South America, the Caribbean, Southeast Asia and Central America. He has also placed some of his own work as well.

Deciding what pieces to place in offices is a collaborative process between Urevbu and business owners.

“In most cases, they don’t know what they want, but they have an idea of what they’re looking for,” he says. “I also do interior design, so I bring that experience to the table.”

In addition to acquiring pieces from Art Village Gallery, Kiesewetter also had a table built by the National Ornamental Museum. The lease to purchase nature of Art Boardroom Collaborative was a major advantage for her.

“Art can be very expensive, but (with this) you can have the art in your space and when you reach the threshold, it’s yours,” she says. “You’re not expending a lot of capital up front to own art when you need to expend it on payroll, office supplies and the business.”

Once the lease-to-own process is over, if a business owner wants to acquire a new piece, they can start the process over, or trade in their existing pieces toward the purchase of a new one. Urevbu says he will also swap out pieces every six months, if that’s what customers want. Once the purchase is completed, the cost can be deducted from taxes. The monthly fees are about 3 percent of the retail price of the piece.

As a regular participate in the monthly Downtown Trolley Tours, Art Village Gallery is often a destination for people in the South Main area, but working the Art Boardroom Collaborative helps bring a little of South Main to other parts of the city.

“My whole concept is that if you look at cities that have incorporated art into everyday lives, people are happier and more open to possibilities,” Urevbu says. “It creates the energy the city desperately needs.”